Sometimes the dog/human relationship can become fraught with tension and anxiety. As far as the human is concerned he/she is doing nothing wrong; they love the dog profoundly and meet their every need. In fact this may be EXACTLY the problem; who is training whom? Many owners, especially in a multi person household, may be inconsistent with their training – for example the primary carer allowing the dog onto the bed whilst their partner shoos the dog off. In the mind of the dog what must he do – go on the bed or stay off? Bring a small child into the equation and we add a third dimension! The child may unwittingly reward the dog for being on the bed one minute and on the floor the next. Before long we have a confused dog, leading to stress and anxiety and potentially causing him/her to come between the carers and appearing to act in a ‘jealous’, sometimes aggressive, way. Orla Doherty states, “Many dogs reacting aggressively to their owners also show concurrent signs of anxiety and fear. This is a contradiction to the traditional attitude that most dominant dogs were confident dogs, regarding themselves as alpha dog in the pack…………..In recent years this theory has been challenged” (Doherty, 2012).

Disney is famous for his anthropomorphism of animals. For a good story, the producers of Lassie and Rin Tin Tin endowed their characters with the cognition of humans to the point of recognising fairness, sharing and ‘talking’. We must allow our dogs to be dogs and learn to ‘think dog’ by offering consistent training, understanding that dogs are essentially selfish, asking, “What’s in it for me?”, being firm but fair and offering adequate physical and mental exercise. On the face of it simple enough, but cognitive dissonance (a useful idea from social psychology (Stewart, 2006) – the inability to hold two opposing beliefs at the same time – does, I believe, play a huge part here. For example, “I like my dog on the bed but I don’t want to encourage bad habits”. This causes, for the owner, psychological conflict, so he/she may simply choose to stop thinking about it, or overlook or reverse one side of the equation!

Is there also a health risk? 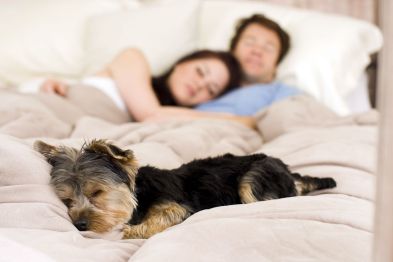 One thought on “Cognitive Dissonance: Are we consistent with our dog training?”