The great white shark’s reputation as the ocean’s most fearsome apex predator may not be justified. Biologists have discovered that the sharks are terrified of orcas (also known, disparagingly, as killer whales) for good reason. It seems that orcas have developed a taste for the sharks’ nutrient-rich livers. Researchers who tagged great whites off the coast of California for more than a decade noticed that whenever orcas appeared, the sharks would abruptly vanish, often not returning for months. They didn’t observe any orcas killing great whites, but discovered that in 1997, fishermen in the region had observed a pair of orcas beating to death a great white and then feasting on its liver; and that in South Africa in 2017, five liverless great white carcasses had been washed ashore after a pod of orcas had been seen nearby.

Orcas appear to have developed a surgical technique for removing a shark’s liver: they bite their victim near its pectoral fin and then squeeze the organ out through the wound. “It’s like squeezing toothpaste”, said Salvador Jorgensen from the Monterey Bay Aquarium, who led the research. 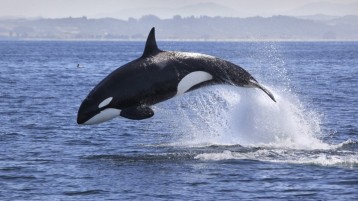