“A smear campaign”: that’s how the US ambassador, Woody Johnson, dismissed the furore in the media over suggestions that we should allow chlorinated American chickens to be imported into Britain after Brexit. He’s right that the unpleasant practice of disinfecting the birds in chlorine isn’t dangerous in itself: we’d need to eat 5% of our body weight in chlorinated chicken each day for it to be a health risk. But he missed the point! The reason we shouldn’t import chickens is that they’re reared in cramped, contaminated conditions. The US has no federal regulations for rearing poultry, and as a result chickens are often kept in warehouses the size of airports, with no room to move, their beaks blunted and their flesh in danger of contamination – hence the chlorine. By contrast, Britain has been at the forefront of improving farming practices: it has forced the EU to raise its food standards; the Red Tractor logo certifies that farms haven’t allowed the use of growth hormones or antibiotic residues. So why take a step back and start importing food produced to far lower standards? Let the US follow our example, not the other way around. 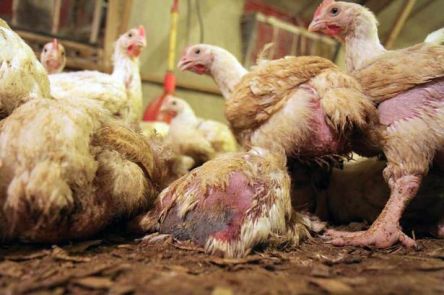