Since Pierre Bourdieu’s (1939 – 2002) hypothesis in the 1960s about the British class system (see previous blog) things have moved on – though not necessarily improved! Karl Marx (1818 – 1883) spoke about the ‘bourgeoisie’ and the ‘proletariat’ to describe the distinction between the land owning gentry and what he described as the exploited working class. The terms ‘precarious proletariat’ or ‘precariat’ are used today in modern sociology.

So, what brought about the class system in the first place as it applies to Britain and, to a similar extent, in the US? The Neolithic Revolution started about 12,000 years ago when hunter gatherers settled down as homesteaders, farming the land, creating villages, ever increasing in size. Cynologist are particularly interested in this period as it coincided roughly with the domestication and dogs, in particular, and other farm animals for meat, milk, fur, wool and skins. This marked the beginning of land ownership with the employer versus employee relationship. Recent anthropological and archaeological studies at Bristol University made huge discoveries from burials throughout Europe, particularly Germany. Those buried with tools, in areas of loess and productive soils, were better nourished than those without tools which were found in poorer regions. This would suggest the beginning of the heritable land and livestock acquisition model and a culture of the ‘haves’ and ‘have nots’ that persisted throughout the industrial era culminating today with homo scientificus! We can see that the seeds of inequality were sown way back in the Neolithic.

The Norman Conquest in 1066, under Duke William II, made a huge impact on the indigenous Anglo-Saxon population. It ended the system of noble hierarchy replacing it with a feudal system. The French conquerors spoke Norman-French whilst the conquered, very often enslaved, spoke what was considered an inferior Anglo-Saxon form of English. This further added to what was an already an unequal society. Their Lordships would grant fiefdoms at their sole discretion to those willing to serve under them in wars. The feudal system of rank and order survived until the beginning of the industrial revolution in the late 18th century. This created a huge opportunity for money owning entrepreneurs; the ‘middle class’ defined by Marx as the bourgeoisie or capitalists. Conversely, those dependent on wages, very often living hand-to-mouth, the proletariat, were described as the ‘working class’.

Under eleven years of the Thatcher government starting in 1979, lower earners took another blow. There was a severe and lasting downturn in manufacturing, record levels of unemployment, the sell-off of affordable housing, a sharp rise in rough sleeping in empty shop doorways, interest rates out of control and the proposed imposition of a ‘poll tax’. This fueled anger and created even greater inequalities as the thought of the day was that money would ‘trickle down’ from City of London wealth makers.

To this day their Lordships’ interests are still represented in the House of Lords; everyone else’s, the commoners, in the House of Commons. This helps perpetuate the dysfunctional British system of ‘upper class’, ‘middle class’ and ‘working class’ as hitherto described by sociologists. Bourdieu attempted to qualify this when writing about economic, social and cultural capital (as described in my previous blog). The British have almost an obsession with pigeon-holing people – and themselves! Nowadays the lines are blurred with much overlapping and grey areas in between – not relevant to the 21st century! This prompted the 2013 BBC Great British Class Survey in conjunction with Mike Savage from the London School of Economics and Fiona Devine of the University of Manchester. Their rationale was that class is no longer defined by one’s job; rather one’s acquired economic, social and cultural capital. For example one may enjoy listening to opera but may not be able to afford going to the opera! Over 161,000 people were surveyed and a new model of seven groups emerged. (NB: I have included an eighth group marked with *). 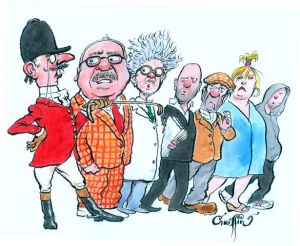 For discussion group – redirect to: https://www.facebook.com/groups/volatileplanet/